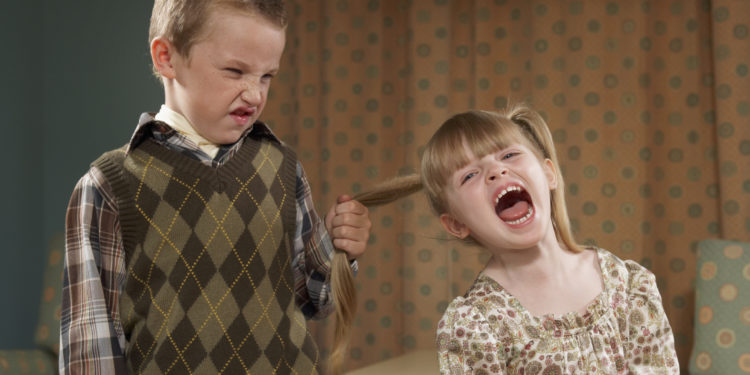 “There is no gift that a father gives his child more virtuous than good manners.”

Parenting can feel like an uphill battle, no matter your child’s age. Not only is there a lot of pressure, but it also feels like whatever you’re doing is constantly being scrutinized by strangers, friends, and family.

If you’re involved in your kids’ lives, then you hear that you’re a helicopter parent and you’re raising a fragile child. If you leave your children alone and try to let them work things out on their own, then you’re neglectful. It seems as though no matter what there’s someone there to tell you that you’re doing it wrong.

However, a lot of issues with brattiness are the parents’ fault — or at least become the parents’ responsibility to fix. Although children might pick up bad behavior by modeling what they see on TV or at school, parents are still to blame if they don’t put an end to it or just attribute it to age.

“It’s not really fair; it’s just kind of the way it is,” Elaine Rose Glickman, author of Your Kid’s a Brat and It’s All Your Fault, told POPSUGAR. “If we don’t teach our kids a better way, nobody else is stepping up to do so.”

The first step to breaking that bratty behavior is realizing what you’re doing to contribute to it. Here, the 13 problematic things that parents of spoiled kids do.

You Think They’re Just Expressing Themselves

If your child is biting, whining, or hitting and you just keep saying to yourself, “Well, that’s what toddlers do; it’s a phase and it will pass,” you could be in for some trouble. Even at a young age, you must have consequences for your child past hugging them and saying, “Oh sweetie, are you mad? Tell me, why did you bite? Are you feeling sad inside?” “If there’s no way of holding them accountable for their behavior, then at that young age, you’re turning your child, unfortunately, into a brat,” said Glickman.

You’re Not Letting Them Grow Up

There’s a lot of inability of parents (and unwillingness of children) to let their little ones grow up. Parents who don’t let their kids assume greater responsibility, self-reliance, and self-possession as they get older are stunting their child’s maturity. “I think when you have a child who is maybe 9 years old, who is unable to cope with not getting what they want, we as parents bear a lot of the blame for that,” said Glickman. “We see a lot of behaviors that you might associate with younger children, but they’re still present in these older children.”

You Put the Blame Elsewhere

It’s true it’s not fair that our kids watch a TV channel that you’d expect to be sweet and child-appropriate and instead they see kids modeling behaviors that are obnoxious, rude, or disrespectful to adults. Kids then want to act that same way and it’s not the parents’ fault that children imitate behavior. However, even if it isn’t fair, it does become the parents’ responsibility to either restrict what their kids watch on TV or to talk to their kids about what they’re seeing in society as well as the media and to make clear how they expect to be treated. Just because you weren’t the one to teach your child a bad behavior doesn’t mean that you’re off the hook from letting them know why it’s wrong.

You Have a Warped Sense of Parenting

To be a good parent, many moms and dads believe that they have to be their child’s biggest champion and concierge at all times. Instead, parents should be able to remove themselves from that role and think of themselves not as their child’s cheerleader, but as their parent. This allows you to look at your child objectively and change your way of thinking. Instead of focusing on what you need to do not to show your child that you think he or she is the best thing in the world, you should focus on what you need to do with your child to make them a mature, responsible, and contributing member of society.

You Foster a Sense of Entitlement

Being a parent is tough — we really don’t like to say no to our kids and our kids really don’t like it when they are told no. So when kids become accustomed to hearing “yes” most of the time, it ends up adding up to is a sense of entitlement where they feel like nothing is enough. “I think when our children whine for something and we give into them, we create that sense of entitlement,” said Glickman. “They want this and they’re going to whine for it and they’re going to get it. It doesn’t take long for that to morph into this sense that they’re entitled to — that this is something they should have just because they want it.”

You Make Excuses Because They’re Young

Just because your child is little doesn’t mean that you can catch a break from disciplining. Even if something is developmentally appropriate, it doesn’t mean that it’s OK. It’s up to the parent to teach their child right from wrong in every situation. There are certain behaviors — like biting or hitting — that you would expect to see in a young child that you wouldn’t expect to see in a 7- or 8-year-old, but even those behaviors need to be addressed or they will continue.

You’re Not Mindful of Their Behavior From a Young Age

Even when your child is an infant, you should still always be mindful of how you want you want them to act and what behaviors you’ll want from them as they get older. “You should think about this in just about everything you do — if you want your child to be polite, then your child should start by saying please to you,” said Glickman. “From the time our kids were very, very little, we would give them choices and we’d have them say please: ‘It’s time for snack, do you want a cheese stick, please or do you want grapes, please?’ or even ‘It’s time to get in the car seat, do you want me to help you? Yes, please or no, thank you.’”

You Don’t See the Whole Picture

It’s understandable to be biased toward your child but in doing so, you’re doing them a disservice. This causes you to overlook bratty behaviors and explain away undesirable actions in many situations. Your kid most likely isn’t being a brat constantly, but just because she can be a delight many times doesn’t mean that she wasn’t behaving as a brat in that moment. When you see the whole picture of your child, you can recognize that they’re being bratty and make a change. “We still love our kids and when we see the big picture,” said Glickman. “Sometimes that makes it hard to see these parts of them, these qualities, these behaviors, that are bratty and that we need to teach them not to continue engaging in.”

If you don’t take your child outside to compose themselves during a public meltdown and instead opt to keep grocery shopping or finish eating your meal, you’re teaching your kid that they can behave however they want and have no consideration for others. “Your child’s feelings, your child’s desire to express themselves, your child’s anger or frustration, and your own desire to have a meal out — none of that trumps the right of other people to have a pleasant meal,” said Glickman.

Cyber bullying and its Repercussions on a ...

When the Prophet Cares