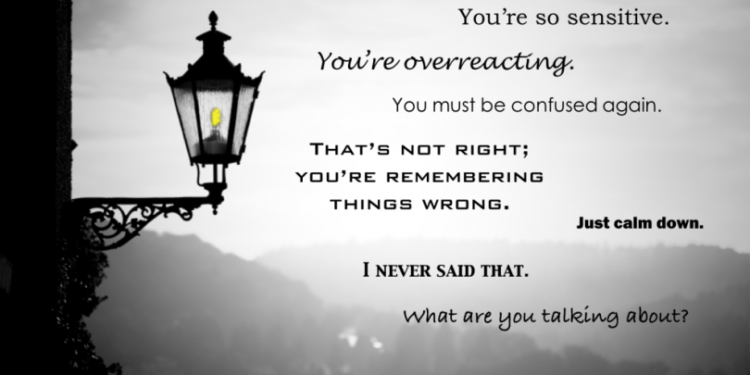 “This term is used in the 1944 Ingrid Bergman film Gaslight, in which a husband purposefully drives his wife insane by flickering lights, making noises in the attic, and then claiming the very real experience was all in her head.”      ― Samantha Rodman

Gaslighting is a form of emotional abuse that’s seen in abusive relationships. It’s the act of manipulating a person by forcing them to question their thoughts, memories, and the events occurring around them. A victim of gaslighting can be pushed so far that they question their own sanity.

The term “gaslighting” comes from a play and subsequent movie called “Gaslight.” In the movie, the devious husband, played by Charles Boyer, manipulates and torments his wife, played by Ingrid Bergman, to convince her she’s going mad.

Gaslighting, whether intentional or not, is a form of manipulation. Gaslighting can happen in many types of relationships, including those with bosses, friends, and parents. But one of the most devastating forms of gaslighting is when it occurs in a relationship between a couple.

According to Robin Stern, PhD, author of the book “The Gaslight Effect: How to Spot and Survive the Hidden Manipulation Others Use to Control Your Life,” signs that you are a victim of gaslighting include:

People who gaslight become expert at pushing your buttons, and they know your sensitivities and vulnerabilities and use that knowledge against you. They make you doubt yourself, your judgment, your memory, and even your sanity. Examples include:

People who gaslight other people in their lives may have a psychological disorder called narcissistic personality disorder.

People with narcissistic personality disorder believe they’re extremely important and that the world revolves around them. They’re self-absorbed and don’t have time or interest in others unless it serves a purpose for them. They aren’t empathetic and don’t have the ability, or the interest, to understand what another person is feeling or experiencing.

Narcissists crave attention and praise and can be demanding. They have grandiose views of themselves, their lives, and their futures, and they often use manipulation as a way of achieving their personal goals.

A person with narcissistic personality disorder may:

Recognizing that you’re a victim in your relationship is the important first step toward getting help. The next step involves consulting a psychiatrist, psychologist, or therapist. They can help you sift through your doubts and fears and understand the realities of what you experienced. You’ll learn how to manage doubts and anxiety and develop coping skills.